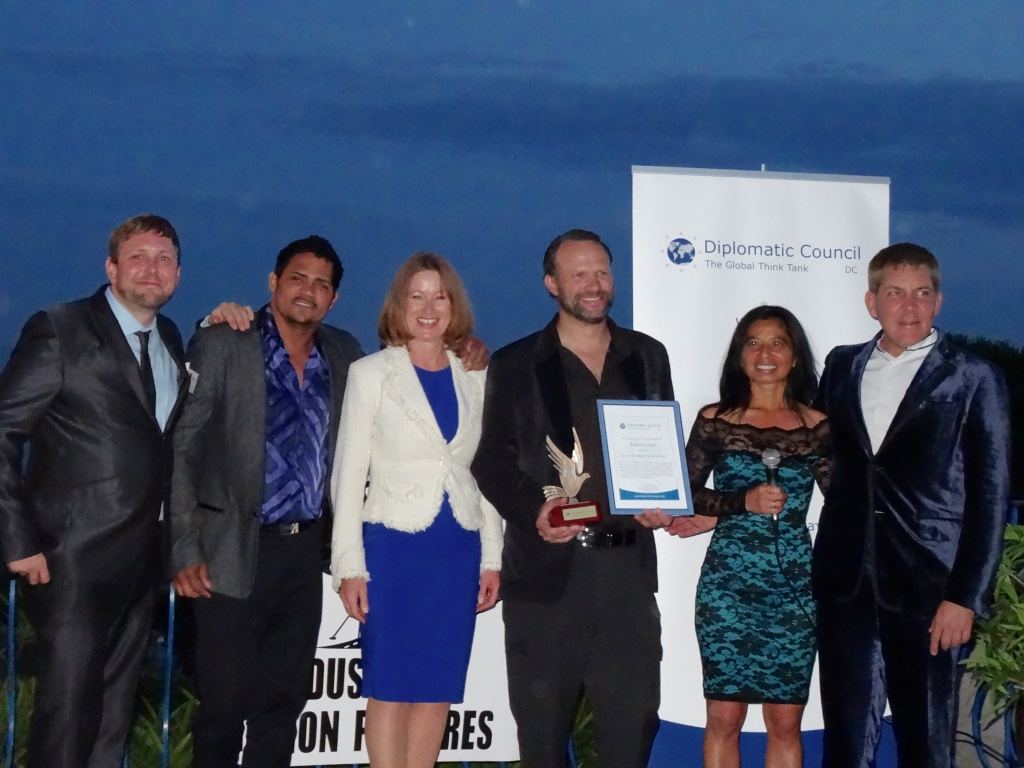 NEW YORK – June 1, 2015 – The international Film Festival in Cannes is one of the most renowned and prestigious film festivals in the world. Launched in 1946, the Cannes Festival is now held each year in May at the Code d’Azur.

It is the Diplomatic Council’s view that cinematic art plays an important role in promoting international understanding. Movies can make a contribution because they introduce different cultures and show different ways of thinking and acting thus broadening people’s horizons.

Actor Lambert Wilson, host of  this year’s award ceremony, said: “The world is written in an incomprehensible language, but cinema helps us translate it universally. Without the guiding light, everyone would be stuck in the dark of the night.“

The sequel to Tiny Tears, entitled A Smile for Bow, is the continuing story of Bow, a little girl from Thailand, who was abandoned at birth. She has HIV and was born with disfiguring fetal alcohol syndrome. The film crew followed Bow when she was offered a chance to come to the U.S. for reconstructive facial surgeries. After several surgeries, she can now smile again. This film was directed by Robert Corna and produced by Brian Mehling, M.D. and Eddie Amarante. The film was completed in 2014.

The Blue Horizon Charitable Foundation (BHCF) is a recognized 501 (c) (3) organization, dedicated to increasing the awareness of global inequalities in healthcare, as well as providing charitable medical care and education to adults and children in impoverished areas. The foundation raises capital in order to support medical centers and clinics by providing medicines vital to basic human survival, by performing advanced medical treatments otherwise not accessible to certain geographic regions, and to finance research and development in stem cell therapies and cellular regenerative medicine. BHCF also supports children around the world who have been orphaned as a result of disease and/or war. In order to raise awareness of these situations, BHCF produces documentary films that bring much needed attention to the plight of those with limited or no access to healthcare. The provision of these resources to less developed areas enables the medically underserved to benefit from high quality care and treatment. For more information please visit www.bluehorizonfoundation.org.

The Diplomatic Council (DC) is a United Nations (UN) registered global Think Tank founded with the objective to serve as a bridge between diplomacy, economy and society. Members committed and dedicated to the DC strongly believe that a thriving economy bringing prosperity to mankind is one of the best guarantors for peace. For more information please visit www.diplomatic-council.org.

Your email address will not be published. Required fields are marked *

Blue Horizon International is the world’s leading provider of adult and children’s stem cell therapies. We have safely and efficiently performed more than 4,000 stem cell therapies to date. We are the only treatment provider approved and associated with The Wuhan University Department of Medicine, The Biochemistry Institute of Wuhan University. We are fully licensed by the Ministry of Health of the Slovak Republic to offer cord blood, bone marrow and adipose stem cell derived treatments at Malacky Hospital near Bratislava, Slovakia.

Get in touch with us

© 2022 Blue Horizon International, LLC. All rights reserved. This website is only intended for consumers outside the United States.