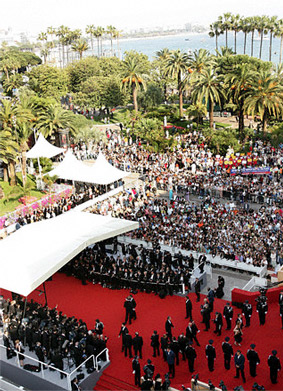 NEW YORK – May 14, 2015 – The 68th annual Cannes International Film Festival is currently underway through May 24th in Cannes, France. The festival previews new films of all genres, including documentaries, from around the world.

Founded in 1946, it is one of the most prestigious and publicized film festivals in the world.The invitation-only festival has been celebrating cinema for more than 60 years. Over this time, the Association Française du Festival International du Film has been able to change while keeping the essence of the festival: a passion for cinema, the discovery of new talent and the enthusiasm of festival goers and professionals from the whole world who come to contribute to the making and distribution of films. With around 35,000 film professionals and over 4,000 international journalists coming together, it is the world’s biggest film event.

The sequel to Tiny Tears, entitled A Smile for Bow, is the continuing story of Bow, a little girl from Thailand, who was abandoned at birth. She has HIV and was born with disfiguring fetal alcohol syndrome. The film crew followed Bow when she was offered a chance to come to the U.S. for reconstructive facial surgeries. After several surgeries, she can now smile again. This film was directed by Robert Corna and produced by Brian Mehling, M.D. and Eddie Amarante. The film was completed in 2014.

Industrial Motion Pictures is a creative film company founded by Dr Mehling. IMP, in association with Mehling Studios brings creative and innovative films to life. IMP has been associated with films such as:Tiny Tears, Italy’s Forgotten Earthquake, BreadCrumbs, Dead Calling, and A Smile for Bow.

The Cannes International Film Festival is an annual film festival held in Cannes, France, which previews new films of all genres, including documentaries, from around the world. Founded in 1946, it is one of the most prestigious and publicised film festivals in the world. The invitation-only festival is held annually (usually in May) at the Palais des Festivals et des Congrès.
The Italian-American actress and director Isabella Rossellini has kindly agreed to preside over the Un Certain Regard Jury. She is a daughter of Italian director Roberto Rossellini and Swedish actress Ingrid Bergman, to whom this year’s Festival de Cannes is to pay tribute.

Your email address will not be published. Required fields are marked *

Blue Horizon International is the world’s leading provider of adult and children’s stem cell therapies. We have safely and efficiently performed more than 4,000 stem cell therapies to date. We are the only treatment provider approved and associated with The Wuhan University Department of Medicine, The Biochemistry Institute of Wuhan University. We are fully licensed by the Ministry of Health of the Slovak Republic to offer cord blood, bone marrow and adipose stem cell derived treatments at Malacky Hospital near Bratislava, Slovakia.

Get in touch with us

© 2022 Blue Horizon International, LLC. All rights reserved. This website is only intended for consumers outside the United States.